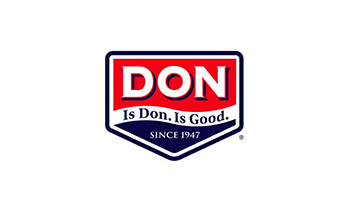 DON® Smallgoods was born in Victoria back in 1947. In those days, the tradition of the neighbourhood family business was still very much a part of the Australian landscape. So it was considered slightly unusual when North Essendon butcher R.J. Gilbertson began producing a small range of processed European-style meats in his store at 15, Keilor Road. Searching for a name for his new products, he settled on the last three letters of his suburb and shortly thereafter, “DON® Smallgoods” began appearing on local shelves. Gilbertson set very high standards for his products, employing European master craftsmen, DON® Fleischmeisters, who brought from their homelands the traditional methods of curing and preserving meat.

Their techniques were an instant success in a rapidly changing postwar Australia and the fame of DON® products quickly spread. In fact, by 1951, the young company had expanded to the point where it was necessary to build a separate factory to keep up with the demand. Within a year, the rapidly growing business became DON® Smallgoods Co. Pty and the seeds were sewn for its national success.

Over the next two decades, the company grew and prospered and in 1970, moved to Altona North into the post modern processing works in the Southern hemisphere.

Following even more impressive growth, in 1988, Bunge Australia purchased DON® Smallgoods from R.J Gilbertson. The business was integrated into their large pig production and processing operations located at Corowa and Bendigo.

The 1990’s saw the creation of one of the Victoria’s most loved branding campaigns: Is Don. Is Good. has set the standards for marketing smallgoods and perfectly positioned DON® as quality products our competitors can only envy.

The successful growth of the company throughout the 1990’s saw George Weston Foods purchase the DON® brand in 1999. A decision which has worked for both companies as just 8 years later DON’s share of the smallgoods market has grown to 17% nationally. Not bad for a little Australian butcher.

DON® today has kept pace with technology without compromising the traditional values and standards of quality which has built the DON® name.